A Halloween To Remember 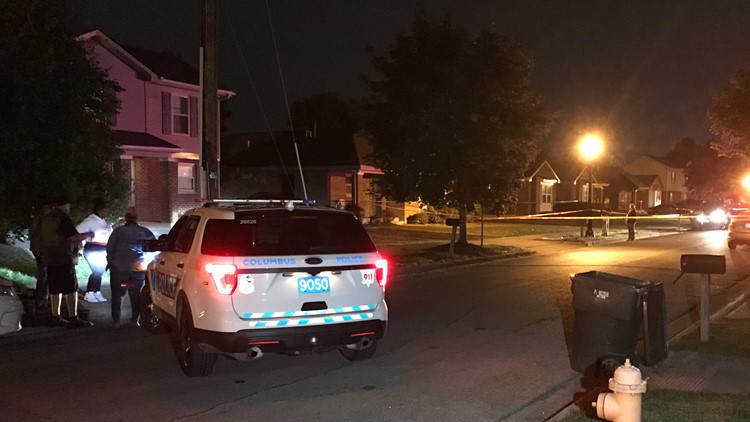 The following is a guest post from our President and Founder, Nicole Banks, who did a ride along with Starfish Executive Vice-President and Columbus Division of Police Officer Pete Casuccio on September 16, 2020. This was Nicole’s third ride along with Ofc Casuccio since Starfish was established in 2018. She has done many other ride alongs with CPD in other areas of the city, to include the Hilltop and South Side, as well as with In/Tac, K-9, and the Helicopter Unit.

Officer Pete Casuccio and I were headed back to the 5 Precinct Substation with our dinner when the Shot Spotter alert came across his patrol vehicle’s computer at 7:13pm. For a split second we looked at each other, then he glanced down at the screen. “That’s right over there,” he said, quickly turning the wheel to maneuver his vehicle.

Shot Spotter is technology set up in three areas of Columbus—South Side, the Hilltop, and Linden—which “listens” for gunshots and immediately reports them to police. It is incredibly accurate and often identifies issues to officers that go completely unreported by human callers. I’ve been on enough ride alongs to know that, while Shot Spotter is incredibly accurate, officers will often go to the area where the shots were fired and there is nothing going on when they arrive.

But on this sunny, beautiful evening in South Linden, as Pete drove his cruiser towards Vesta Avenue, the Shot Spotter alert was almost immediately followed with a report of a man in the road, shot. This had never happened to me before. “But,” I reasoned, “maybe he’s just injured. He’ll probably be fine.”

Pete was the first officer on scene at Vesta. He pulled up feet away from a man lying on his back on the grassy berm, with his feet in the street, and called over his shoulder for me to stay in the car. (This is common practice on shots fired calls. The officers don’t want us to get out of the vehicle until they know it’s safe.) Clustered around the man was a small group of people—very obviously distressed. Just as Pete began to get out of his car, another CPD cruiser arrived from the other direction and parked opposite me. Those officers and Pete both moved in unison to clear people away from the injured man, who was later identified as Shawntaye Gavin, 31.

Within minutes, the medics came and whisked Mr. Gavin to Grant Medical Center. A short time later, I learned he had passed away.

I watched as two rings of crime scene tape went up, one smaller ring with a larger ring around it, with me and the cruiser I was sitting in the center of those rings. The larger tape looped through people’s porch railings, and the area enclosed a running car that I thought must be a detective’s vehicle but later learned was the victim’s. The tape ran in front of a tiny boy, no more than four-years-old, standing in front of an older man, who had his hand on the boy’s shoulder. The man stood talking to someone while the boy gaped at the police. After a few moments, the older man patted the boy and they moved away. I sat there stunned for a few minutes that such a tiny boy would already be witness to such an event.

As the activity increased, I rolled down my window so I could hear what was going on, and there was a surprising amount. Patrol officers don’t just make sure the scene is safe and then wait for the homicide detectives to come. They begin talking to people in the area, asking questions about who saw what, who the victim was, where he lived, what he was doing there. Safe Streets Officer Sean Lutz, who has worked with Starfish on a number of occasions, had in-depth conversations with multiple residents close to the crime scene. I watched him as he went house to house, talking at length with people on their porches, trying to obtain information.

Obtaining information can be a challenge. Rosewind is an attractive apartment complex. It is clean and well-maintained with nicely mulched trees and green grass. It is also very dangerous. On July 4, Heather Corley’s 14-year-old daughter, Indiah Corley, was shot on Vesta Avenue, just a few doors away from where Mr. Gavin was. Indiah went off with friends after a family barbecue and her mother never saw her alive again. Her murder remains unsolved, and despite the efforts of officers and detectives, despite the tearful pleas of her mother, none of the people present at her shooting have come forward with usable information.

Pete came back to the car several times to talk to me and give me updates and then finally told me I could get out of the vehicle. I glanced around, not sure of where I should stand. Sensing my discomfort, he gestured for me to follow him, and we stood on the opposite side of the street from the cruiser, where a small cluster of officers stood.

But he didn’t remain there for long. Someone called to him and off he went. I watched, listened, and talked to other officers, who were happy to answer questions I had. My name was added to the list maintained by one of the 5 Precinct officers, whose responsibility it was to write down the names of everyone who entered those dual rings of crime scene tape.

I was surprised to see how much work occurred while we waited for Homicide to come. I’m friends with several of the officers who were on scene there, including Pete and Ofc Lutz, and a casual observer would think that with so many officers on a scene there would be lots of time for us to chat. There was not. They were busy talking to witnesses and gathering information. Because Pete was the first officer on scene, he would be the one reporting to Homicide, so everyone went to him with their information.

There were many officers going up and down the street, house to house, speaking to people, trying to get witnesses to talk. Although no large crowd had gathered there, people still wandered into houses close to the crime scene tape, and officers kept a watchful eye on them, going to speak to them as well.

When the Homicide team arrived, I was quite surprised to find it was just that—an entire team. Raised watching TV shows, I thought two detectives go out to crime scenes. Even after listening to Community Liaison Officer Tim Mounts, who is now back with Homicide, tell us at our Starfish meeting that other detectives go out to assist, I was not prepared for the difference between TV and what CPD does. When we see TV shows, they seem to send out two detectives and a few support people. Not CPD. There were five Homicide detectives on scene, counting Sgt James Marable. I was told there was another one at Grant, and another one elsewhere. Seven. Detective Jason Arnold is the lead investigator on this case. The others are assigned initially to help him with the gathering of evidence.

The detectives gathered around Pete, who gave them an initial briefing. They took quick and detailed notes on their clipboards, most of them with LED lights attached. Some asked clarifying questions, which he answered, or asked him to repeat himself. When he finished, he looked at me and said, “I have to go give a more detailed statement. Stay with the sergeant.”

I stayed with his sergeant, Joe Riddle, who also quickly became involved in the investigation and had to leave. So, I stayed with Sgt Marable, who explained that most of his work was administrative and therefore needed to be done back in the office once they cleared the scene. Which meant that the poor man got peppered with questions from me for about 45 minutes.

The investigation fascinated me, as did the flurry of activity that surrounded it. The detectives, once they received their briefing from Pete, mostly whizzed by at breakneck speeds. I remember at one point, Sgt Marable called out a question to one of them, and the detective didn’t break stride, calling out the answer to his boss over his shoulder as he passed.

Another time, two detectives stood near enough to us that I could overhear their conversation. They were talking about where cameras were in the complex and whether they needed warrants or could use them from a previous investigation. Every conversation was focused on the task at hand.

Please believe me from having been on the scene of an inner-city homicide—Columbus Division of Police officers and detectives take these investigations very seriously. They were uniformly focused on and dedicated to the task of finding the killer(s) of Mr. Gavin. Thinking back to that night, when a man lost his life, and all those people who came together to work to find out who did it, brings tears to my eyes, because I know they have done that at every scene for all 122 homicide victims this year. I do not think they realize how amazing that is. I know that every officer we work with has been on more homicide scenes than they can count, even if they’re not detectives, and once they’ve become used to working in a situation, they don’t realize that they’re good at something and they don’t realize the value that they add. But as an outsider that evening, I realized it, and I want to thank them for being there to work for justice for victims and their families.

Mr. Gavin’s death on September 16 was listed as number 106 of this year. In all of 2019, we had 105 homicides. We are currently on pace to surpass the record of 153* deaths set in 2017—something no one wants to see happen. Despite the number of cases, CPD’s Homicide detectives and patrol officers obviously care very much about solving each and every one of them.

I actually didn’t see Pete again that night after he went off to give his statement. The scene was expanded and after he gave his statement to the lieutenant, he had to go guard a larger area over a block away, and our friends from K-9 were brought in to help search for firearms. The evening mid-watch shift came on, and with them our friend Officer Mel Romans, who did a big Christmas Assignment with us last year, came over to tell me that Pete radioed in to say I needed to go back to the substation with one of the other officers.

My ride along in South Linden was over, but the investigation into Mr. Gavin’s murder continues. If you have

If you have information about Indiah’s death, please contact Detective Lemmon, 614-645-4730. Please take a moment to watch this interview Lacey Crisp did with Indiah’s mother, Heather Corley.

*The number of 153 homicides in 2017 is the revised figure after the deaths of patients at Mt Carmel Hospital, which were later determined to be homicides. The initial number at the end of 2017 was 143, which is the figure still frequently reported in the press. Unfortunately, it appears 2020 will surpass both of those numbers.